So, having barely recovered from all the festivities, we've just returned from Fibre East and found that the month is nearly over!

We're ploughing on with married life and married knitting - I'm still getting used to Mark being a knitter as it's only been a year and it still surprises me to find him rifling through the stash and itching to cast the next thing on as soon as one thing comes off the needles!


Some of you may have seen pictures of his mad dash to finish his Rainbow Linus in time for Fibre East...and didn't it turn out stunning? 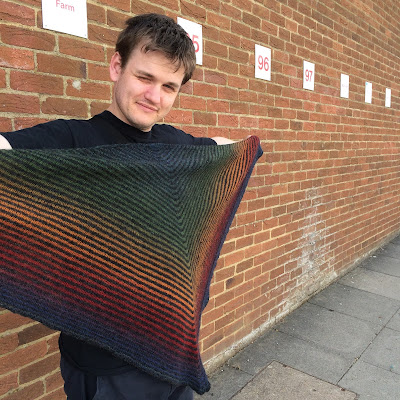 The Rainbow colour way of the Ullcentrum yarn gets me every time - it is such a deep, rich gradient and it looks fantastic against the solid Anthracite.

I was doing some frantic knitting of my own too. I'd started mulling over Anna Maltz' Sceles already back at Iknit Fandango earlier this year, but it had fallen down the queue behind all the wedding projects. Once all the relatives had gone home and the left overs were all eaten, I realised that I didn't have an urgent project on the needles to fret about anymore, and clearly that couldn't be right?
So, with a little advice from Anna herself, I cast on in two of my favourite linen colours: Turmeric and Gunmetal (2 hanks of each). I used the Gunmetal for colour A and the smaller 4.5mm needles throughout - our Lithuanian linen is a touch finer than the original Kalinka stated in the pattern. 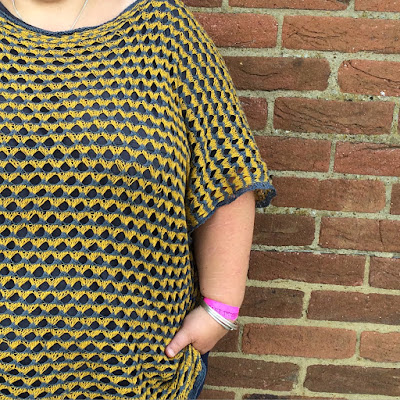 I cast on as for size 3 - the design is intended to be worn with extreme ease which I didn't think would suit my frame, so I chose a size that would give me a reasonably loose layering top. I then added a few repeats to the length as again, I have a bit more to, erm, cover... It's a very well written pattern though, and an easy to adapt shape, so you can really make it work to your own preferences.

Having once more knitted to a deadline, Mark and I suddenly found ourselves away from home, in the middle of a show with...nothing to knit! So we've now done the sickening newly-wed thing of casting on matching sweaters - Summer Green for me and Autumn for him ;) 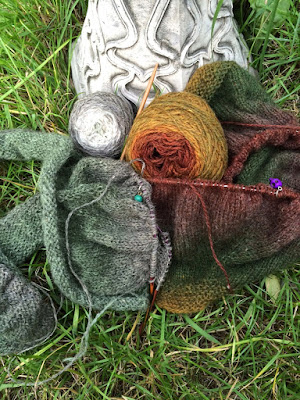 In the first instalment of what promises to be a very busy autumn for Midwinter Yarns, I am very excited to announce that one of our yarns has been used for a pattern in the forthcoming issue of Pom Pom Quarterly. It is the beautiful, heavily cabled Maude sweater - pictured here in Thick Pirkkalanka in Jade. So much wonderful texture for winter, fantastically complimented by the crisp stitch-definition of the Pirkkalanka wool.

You can find all the details of the new issue here - and I believe that they will be running a KAL with yarn prizes to coincide with the launch over on their Ravelry group. We're also celebrating here by offering 10% off all Thick (Vahva) Pirkkalanka in the shop with coupon code POMPOM15, so please feel free to use it if the pattern has inspired you :)

Lastly, just a small announcement to say that we will be on holiday from the 8th of August. All orders placed after the 6th will be despatched on the 17th of August.

So after several months of secretive knitting, bunting-making, booze-cruising and crockery-collecting, Mark and I tied the knot (literally) three weeks ago. 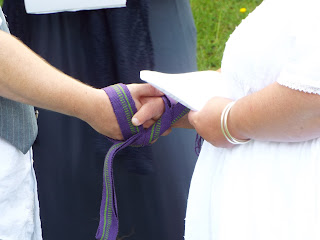 What was intended as a simple country wedding did turn out to be a three day celebration - our desire to have an outdoor ceremony meant that we also had to have a legal registry wedding first...twice the fun and twice the outfits!
My most special wedding splurge was the stunning silk and linen yarn from Siidegarte who I met at the Edinburgh Yarn Festival, and who dyed this storm blue colour especially for me. The cardigan is Hitofude - a really exciting knit in an unusual but very clever construction. 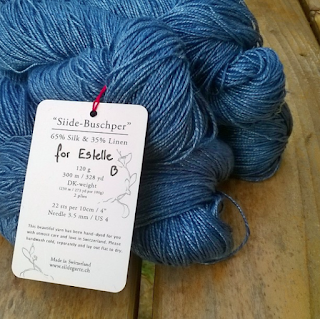 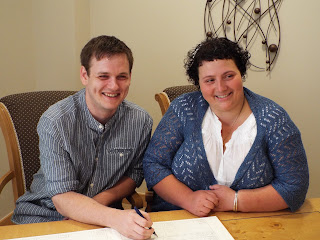 Then there were gifts for the Mothers,  Best Lady and our own designated High Priestess. Being a summer wedding, the yarn of choice was our Lithuanian Linen - perfect for beautiful lace patterns and easy to wear stoles. The linen holds lace patterns beautifully, and it's lack of elasticity means that the fabric stays nice and flat, and of course drapes fantastically.

The Gunmetal and Ink stole was knitted with the Leaf Lace pattern, free from Ravelry 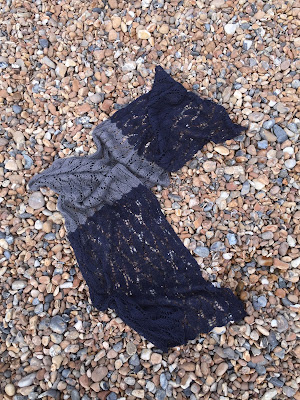 This Violet one is called Upstairs, also free 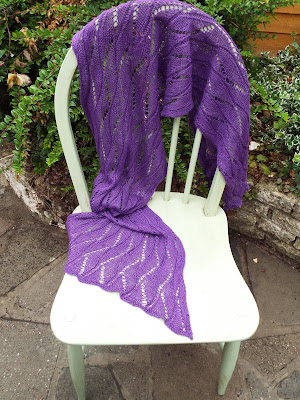 There was also one in the Rain on Window as well as the Branching Lace stitch from Eden Cottage Yarn's stitch dictionary...unfortunately we were working on these right up to the wedding and ended up giving them away before we quite got a chance to take proper pictures of them all! 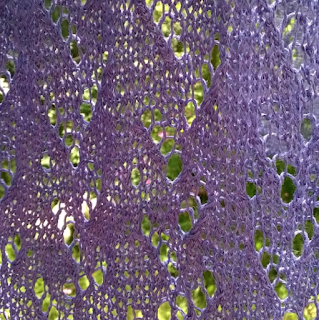 And of course, I also had my own bridal shawl to make, in yarn that was gifted to me specifically by my linen supplier. The pattern is called Elderberry, but I took my inspiration from both the elderflowers that went into our welcome drinks and the hydrangeas in my bouquet and chose clear/silver beads with the green leaves. I also love the pattern because it reminds me of my favourite Berså pottery ;) 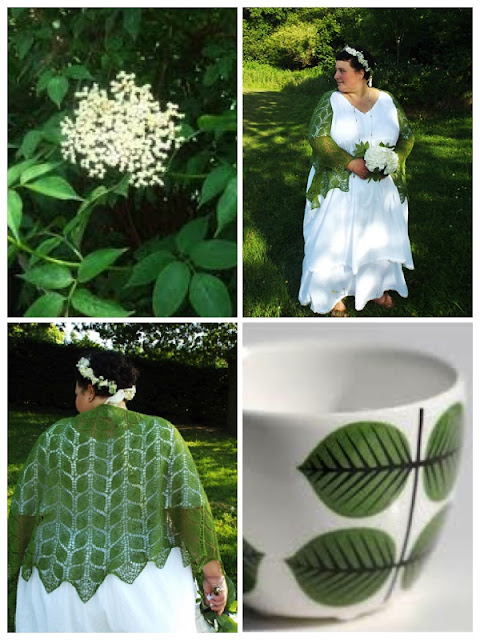 We wanted our day to be all about the things we love and this showed in everything, from the lebanese food made by a dear friend to board games, cheese wedding cake and , of course, a knitting corner. All our knitter guests were encouraged to bring their projects, and a few others asked to be introduced too! This resulted in possibly my very favourite picture of the day: 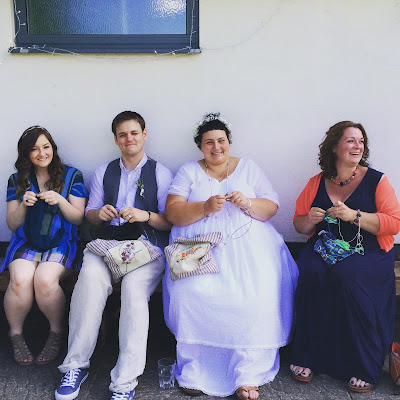 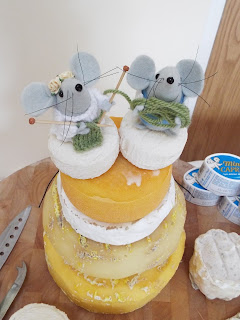 First off I should say that this is Mark writing this. Estelle is far too busy networking (shopping) and checking on contacts (Facebooking) and knitting (err... actually knitting!)
And that this is my first ever blog post! Woohoo! only a decade behind the rest of the world!

As this blog is a little behind (I will explain later) we've got a bit of catching up to do.

WoolFest was a great show for us, not only was it set in the beautiful hills and dales of Cumbria, it was full of nice people who seemed pleased to see us there.
We were in the smaller section of the show, fairly close to the back car park entrance. But there was so much to see, just in that smaller hall, that I have no idea how anyone managed to get around everything in one go. But thankfully there were strategically placed coffee vendors and places to sit down so people could spread the yarn overload out a little.
There was also live music in both halls, which kept my foot tapping throughout and gave the whole show a bit more of an upbeat festival air to it, which I loved! 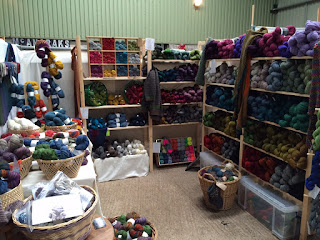 Estelle got far too excited over the sheep as usual


Along the top wall of the bigger hall, the organisers had arranged a gallery showing a whole range of beautiful things you can do with wool, from stunning pieces of clothing to Art pieces. These two caught Estelle's eye. 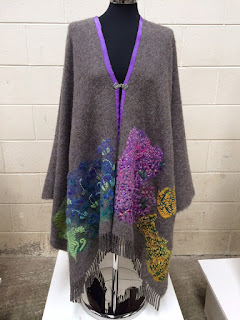 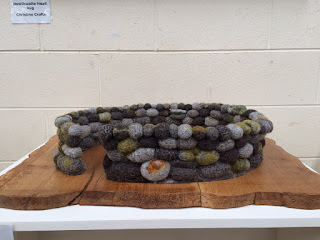 Our friend  Fiona from the Edinburgh Wool Festival came along to show us her freshly finished, barely dry Linus! shown here with the hanks they came from- Heather and Blue,Green,Purple. 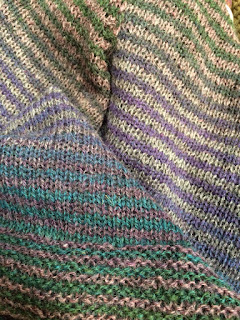 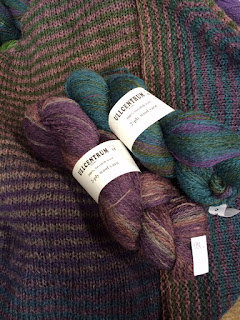 And of course it wouldn't be a good show without coming away with a little for the stash, now would it?
So we got three balls of Herdwick wool, spun in Laxtons mill. Rug wool from a local mill to complete the giant knitting kit from London. Some chunky cotton destined to become potholders. and  some last minute bargain bin cotton.
And then Estelle ruined the monochrome effect by getting some colourful fabric and a violet bag strap. 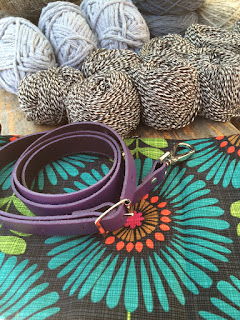 I started another Linus while in Cumbria, this time in Anthracite and Rainbow, which is going surprisingly quickly considering how slow I usually am. 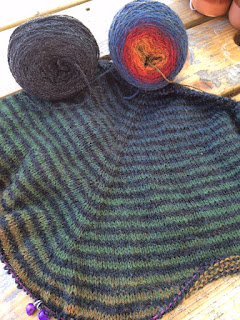 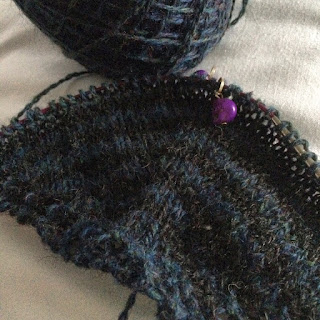 So as you can see, much wool and much knitting is still happening, but I'll leave it there and carry on later when we'll get to what's been taking up so much of our time. (not much of a surprise if you follow us on Facebook but still)

Posted by Midwinter Yarns at 07:28 No comments: